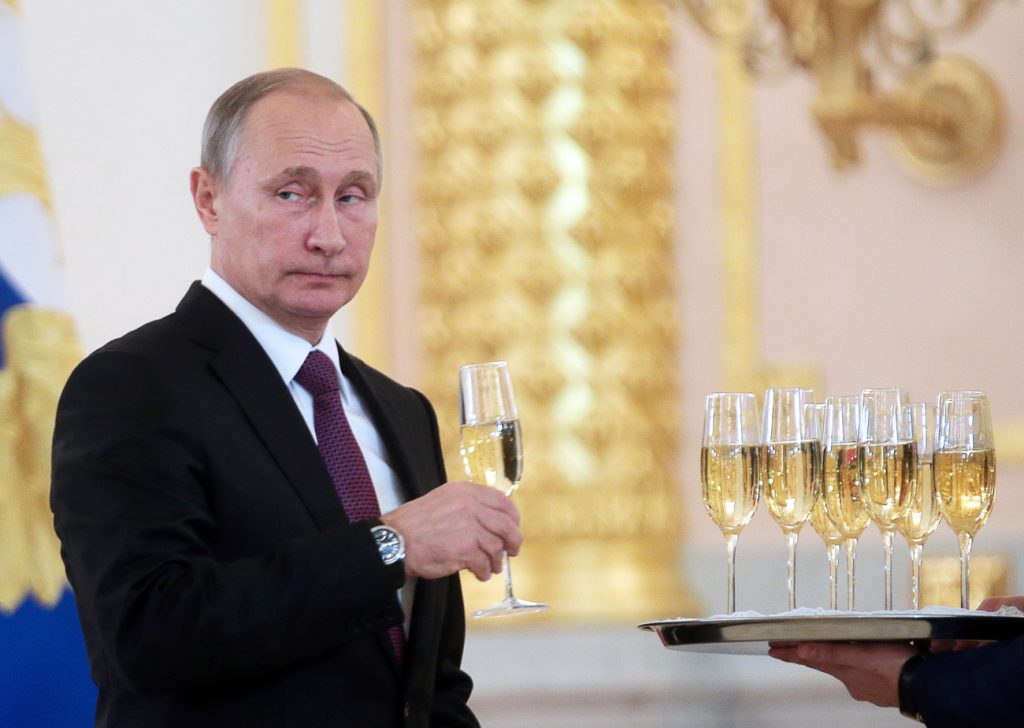 Following an adroitly-managed presidential election campaign, Russia’s leader for the last 18 years, Vladimir Putin, won a new six-year term of office in decisive fashion on Sunday, garnering over 76 percent of the vote.  If President Putin completes his new term, he would be only the second ruler of post-Imperial Russia to have governed the country for more than 20 years; the other was Joseph Stalin.

Perhaps the only elements of drama in the campaign surrounded the final margin of victory and the level of turnout.  For leaders in soft authoritarian regimes like Russia, it is not enough to defeat opposing candidates.  One must project an aura of political invincibility, which requires reducing opponents to also-rans in high-turnout elections where there are at least the formal trappings of competitiveness.

As the tables below illustrate, Putin’s victory margin was almost 65 percent, the highest in the post-communist era.  His vote total exceeded 56 million, over ten million more votes than he received in the previous presidential election.  Voter turnout reached 67 percent, up from the previous presidential election but below the 70 percent figure that the Kremlin apparently set as its goal.

To engineer these impressive results, Putin and his political allies pursued a carefully-calculated strategy, whose opening move was the exclusion from the presidential race of the Russian president’s most vocal and visible opponent, Alexei Navalny.  An anti-corruption campaigner whose mastery of social media and internet memes had electrified some segments of Russia’s political opposition, Naval’ny was unable to contest the presidency because of a 2014 criminal conviction for fraud, a decision labeled “arbitrary and manifestly unreasonable” by the European Court of Human Rights.  Following his disqualification in December of last year, Navalny launched a campaign to boycott the election as a means of sullying Putin’s mandate for his fourth and—under current constitutional provisions—final term of office.

If the official election results are accurate—and there is credible video evidence of ballot stuffing in some Russian precincts—Navalny’s appeals for a boycott were no match for the combination of rule changes, media exhortation, and administrative resources marshalled behind the official get-out-the-vote effort.   In fact, by tossing down the gauntlet, Navalny encouraged the authorities to redouble their efforts to achieve a healthy turnout.  For the first time in the post-communist era, the Central Election Commission allowed voters to cast their ballots outside the precinct in which they were registered, provided they had informed the authorities of their intent by March 12.  Moreover, the Central Election Commission carried out a purge of voter rolls prior to the election in order to remove approximately 1.5 million “dead souls” as well as voters who were registered in multiple districts.  Without this initiative, turnout figures would not have increased appreciably from the last presidential election.

As in earlier electoral contests in Russia, state officials, from governors to university administrators, served as prodders and proctors to boost turnout in the election.  In one provincial university, students faced eviction from their dormitory if they didn’t turn out to the polls.  As observers from the OSCE revealed, governors in some regions organized competitions among electoral commissions and “offered monetary rewards for PECs [Precinct Electoral Commissions] with the best performance and the highest voter turnout.”[iv] Despite the full-court press to mobilize voters, turnout varied widely across the country, with some regions in Western Russia and Siberia lagging 35 points behind the ethnic republics of the Northern Caucasus and Tyva, which are the perennial front-runners in voter turnout in Russian elections.

Whether in Russia or the West, the electoral playing field is never level when an incumbent is in the race.  A sitting president in any country enjoys greater media attention because the daily tasks of governing shine a spotlight on the incumbent that is not available to challengers (see table below).[v]  In the Russian case, however, the Putin campaign was able to control the rules and the narrative in ways that constantly played to the strengths of the incumbent while highlighting the vulnerabilities of his opponent.  For example, the authorities moved election day up by a week to coincide with the fourth anniversary of Russia’s annexation of Crimea, which remains a wildly popular decision in Russia.   President Putin arranged to give his State of the Union address (Poslanie) just a little over two weeks before the election, an address that dominated several news cycles because of its dramatic claims that Russia possessed novel weapons systems for which the West has no answer.  Even the ballot itself presented President Putin in a distinctly favorable light.  Vladimir Putin’s name stood out in the middle of the ballot with its brief two-line biography, while all of his contenders had unwieldly six to eight-line descriptions of their backgrounds.  More importantly, the ballot listed Putin as a “self-nominee” [samodvyzhenetz], whereas the other candidates stood under a party banner at a moment when parties were the least respected of all Russian political institutions.[vi]

During the electoral campaign, the advantages of incumbency in a soft authoritarian regime were on full display on Russia’s main evening news broadcast, Vremia, which treated its viewers to campaign coverage that set President Putin apart from the seven other contenders for the presidency.  Each broadcast offered a short segment devoted to the campaign activities of Putin’s opponents as they traversed Moscow and the country in search of votes.   This daily news block on the election always ended with coverage of the Putin campaign, without featuring Putin himself.  While the president was pursuing the Russian equivalent of the Rose Garden Strategy, his designated electoral agents [doverennye litsa] were pictured on the hustings.  Among these agents was an assortment of celebrities drawn from the worlds of culture and sports.

Set against the star power of the Putin team was a rag-tag band of opposition candidates for the presidency, whose backgrounds and behavior were no match for the sober, dignified, and professional image projected by President Putin.  During one of the presidential debates, Vladimir Zhirinovsky, the mercurial leader of the nationalist Liberal Democratic Party, hurled sexist insults against the only woman in the race, Ksenia Sobchak.  Sobchak responded by dousing him with a glass of water.   In another debate, the candidate representing the Communists of Russia, Maxim Suraikin, had to be physically restrained on stage as he charged a designated agent standing in for the candidate of the Communist Party of the Russian Federation, Pavel Grudinin.

Where most of Putin’s opponents escaped frontal assaults by the country’s media, almost all of which are pro-Kremlin, that was not the case with Pavel Grudinin, the millionaire businessman-cum-Communist who finished second in the presidential race.  The vitriolic news anchor for Vremia, Kirill Kleimenov, relentlessly criticized Grudinin’s business practices and his family’s ownership of luxury properties abroad, including ones in what Kleimenov called the “NATO country of Latvia.”  Kleimenov claimed that such links to the West should be a disqualifying factor for a Russian presidential candidate.  This tactic was emblematic of Putin’s campaign, and of Putin’s leadership more broadly, which has sought support and legitimacy in its championing of what one observer called “anti-Western, isolationalist, and conservative values.”[i]  Portraying Russia as the perennial victim of the actions of nefarious Western elites, who seek to demean and diminish Russia through indignities ranging from doping scandals to economic sanctions, Putin offered himself to the nation as the only guarantor of Russian security, honor, and grandeur.

The question now is what the Russian president will do with the resounding mandate achieved in the March 18 “referendum on Vladimir Putin,” as two Russian journalists dubbed the election Sunday evening.[ii]  The opposition may be in complete disarray, but Putin still faces serious challenges to his presidency from a range of domestic and foreign policy issues, from a shrinking labor force and increasing pension commitments to the morass in Syria.  In recent years Putin has postponed confronting Russia’s systemic problems by deflecting attention onto foreign adventures and by offering the “balm of righteousness”[iii] to a nation whipped into a frenzy about its unfair treatment by the rest of the world.   It is unclear how much longer Putin can rely on these tactics to sustain his personalist regime.

At an impromptu press conference immediately after the election results were announced, a journalist asked the Russian president whether “in the next six years we will see a new Vladimir Putin or the old one?” Putin’s response: “Everything changes…we all change.”  At the moment, though, change does not seem to be in the offing.

[ii] The table contains figures drawn from a search of the East View database of central Russian newspapers, using the first and last names of candidates as the search terms.

[iii] Polls conducted in October 2017 showed that political parties were viewed as completely trustworthy by only 19 percent of the population; the corresponding figure for the President was 75 percent.  Levada Center, Institutional Trust, October 11, 2017. https://www.levada.ru/en/2017/11/10/institutional-trust-3/

[vi] A phrase used to describe George Wallace’s rhetoric and actions directed to white Southerners, whom he cast in the role of victims, in this case due to the imposition of Northern values on the South.   Dan T. Carter, The Politics of Rage: George Wallace, the Origins of the New Conservatism, and the Transformation of American Politics (Baton Rouge, LA: Louisiana State University Press, 1996), p. 109.