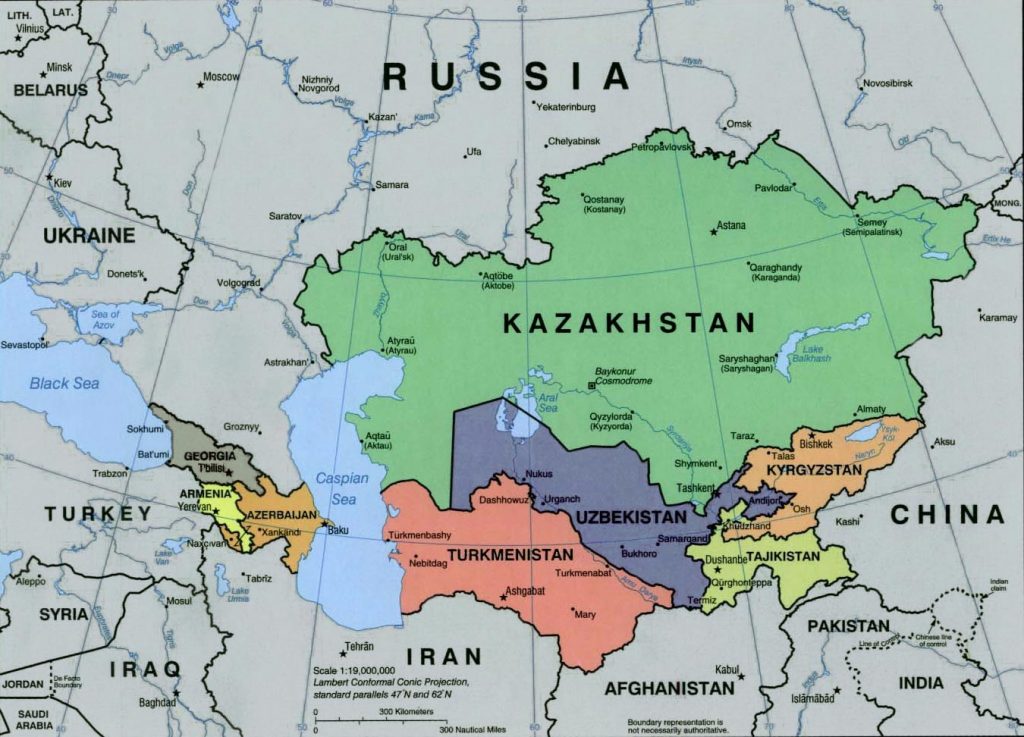 By Elham Gharji, University of Coimbra.

Russia’s role in the international politics of the post-Soviet states encompassing the wider Caspian region of Central Asia and the Caucasus, has been subject of scrutiny ever since the collapse of the Soviet Union. The central puzzle concerns Russia’s continuous primacy over other regional and external actors in the region. Many of the existing literature on the post-Soviet states of the wider Caspian region describe the international status quo there in terms of Russia’s hegemonic dominance. While Russia has indeed been acting assertively at times, it does not enjoy hegemonic control as it lacks the necessary resources. At the same time, the smaller states in the Caspian have the necessary agency to make independent foreign policy choices.

However, the strategic choices for the post-Soviet Caspian states are partly limited due to lack of capable and reliable external alternative. Western powers, such as the EU, have not been genuinely interested in the region itself. Rather, they have been interested in their own security. The EU’s neighbourhood policy treats the wider Caspian as its borderlines and engages with the region primarily to secure its eastern borders. Beyond this, the EU has not been interested in expanding into the region and establishing meaningful and long-term security presence.

Given the limited strategic choices, Russia’s primacy as a ‘big brother’ status of the Caspian region comes not from its hegemonic capability, but from the realist evaluation of the status quo by the smaller post-Soviet states in the Caspian, who find cooperation with Russia to be beneficial in the absence of other reliable partners. A change in the existing dynamics is not possible without a more assertive presence of Western powers in the region, such as the EU.

Russia’s role in the international politics of the post-Soviet states encompassing the wider Caspian region of Central Asia and the Caucasus, has been subject of scrutiny ever since the collapse of the Soviet Union. The central puzzle concerns Russia’s continuous primacy in the region over that of other regional and external actors. A major reason for Russia’s hegemonic dominance in the Caspian concerns its role as the main security provider. While Russia’s military role cannot be ignored, the relationship between Russia and the post-Soviet states in the wider Caspian region cannot be explained in terms of hegemonic dominance. Nor can the concept of hegemony, which portrays other states in the region in some sort of neo-colonial relationship with Russia or as passive recipients of Russian foreign policy, help to understand the region’s dynamics.

This paper relies on the analysis of secondary data to evaluate Russia’s role in the wider Caspian region, and argues that Russia’s power status in the Caspian region comes not from its coercive capacity or hegemonic policies, but derives from a collective interest and regional consensus of the Caspian states on its role as the leading power, given the absence of any other reliable external alternative. In this context, with exception of Georgia, the post-Soviet states in the Caspian seem to have a sovereign, realist interest in maintaining the present regional order.

A Russian hegemonic order in the Caspian?

Analysts and researchers have often linked the post-Soviet regional order in the Caspian to Russia’s hegemonic foreign and security policy in the region.  For example, Slobodchikoff [1] writes about how Russia as a major power in the region shapes the regional order by devising specific institutional mechanisms and bi-lateral and multi-lateral treaties with states in the post-soviet space. By analysing Russia’s various treaties with countries in the region, Slobodchikoff argues that Russia uses “bilateral and multilateral cooperation to develop a security architecture that provides order, stability and predictable behaviour for both Russia as a hegemon and the weaker states in the region”[2]. Analysts argued that regional institutions such as the CIS, CSTO and the more recent initiative of the EEU, are hegemonic structures and instruments used by Russia to exert its control over the region.

Abundant evidence shows that smaller states in the post-Soviet space have the capabilities to make independent choices, and at some extent, manipulate big powers to serve their interests. Examples include -but are not limited to- Uzbekistan, Azerbaijan, Kazakhstan and Turkmenistan’s various engagements with external powers such as the US, the EU and China, within the context of various projects, which demonstrate these state’s capabilities. Uzbekistan, for example, has been switching between partnerships with Russia and the US in various points in 2000s. Azerbaijan has extensive relations with Western powers as well as regional powers such as Turkey. Kazakhstan, which is mostly considered to be a close ally of Russia, stood firmly to defend its national sovereignty when Russia’s Foreign Minister Sergey Lavrov demanded on March 15, 2018 that Kazakhstan’s visa relaxation with the US shall be coordinated within the EEU. This allowed US citizens to visit and stay Kazakhstan up to 30 days without a visa. Kazakhstan’s Minister of Foreign Affairs responded by saying that “[i]ntroducing or abolishing visa requirements for foreign citizens is the right of any sovereign country…. When they outlined the agreement on the creation of the EES (EEU), member states…agreed that issues related to national sovereignty be excluded from the group’s competence”.[3]

Economic data also disproves Russia’s hegemonic control of the region. After the fall of the Soviet Union, the region has been increasingly disintegrating with a very poor record of intra-regional trade. Economic data on Intra-Regional trade intensity index for Central Asia (including Armenia, Georgia and Azerbaijan) indicate that there has been a sharp drop in the degree of trade intensity from 33.87 in 2000 to 17.10 in 2016 (Asian Development Bank, 2018),[4] proving that the regional exchange of good and economic integration has been steadily decreasing in the region. Such data challenge the idea of a regional order being tied under a regional hegemon’s leadership. Regional hegemony produces greater integration and intra-regional exchanges, which are increasingly absent in the post-Soviet space. In 2015, Russia was the 4th export and import partner for Kazakhstan, preceding France. The top partners were Italy, China and the Netherlands, respectively.[5] In 2015, the Netherlands, Switzerland and the United States were the top three investors in Kazakhstan’s economy.[6] China is the biggest consumer of Kazakh oil. The two countries have expanded trade relations, including establishing a cross-border free trade zone, despite Kazakhstan being one of the main EEU partners.[7] With the exception of Tajikistan and Kyrgyzstan’s huge dependency on remittances from Russia, economic exchanges with other external markets have been expanding.

In fact, Russia’s resources to establish its leadership in the region have been limited and “they are insufficient to fulfil its leadership ambitions”.[8] This is evident in CSTO’s inability to make any major collective action, including the inability to intervene in conflicts situations when needed. In 2010, Russia refrained from intervening in the conflict in Kyrgyzstan within the framework of the CSTO, fearing backlashes from Uzbekistan. CSTO’s inability to act as regional security architecture is indicative of the fact that the organisation remains, weak, constrained by bilateral considerations and inefficient to fulfil Russia’s hegemonic agenda. This also means that countries participating in it have sufficient agency to challenge its agenda should they find this counterproductive  to their interests. This was demonstrated by Uzbekistan’s withdrawal from the organisation in 2012, demonstrating that Russia could not dominate the country’s agenda.

Despite the lack of hegemonic power, Russia appears to be the leading actor in the region. With the exception of Georgia in 2008 and Ukraine in 2014, the region has not witnessed a major regional breakaway from Russia, which demonstrates a general acceptance of the Caspian states to Russia’s leadership role in the region. Even in Georgia and Ukraine, the political elites and the society are deeply divided on the question of Russia. As a matter of fact, the conflict in Georgia strengthened regional consensus on the status of Russia as the leading power, by conveying that the EU and NATO are not capable or genuinely interested in defending states willing to challenge their regional order. As such, the post-Soviet states find cooperation with Russia a matter of interest given the lack of alternatives, consenting to Russia’s leadership role. In other words, other Caspian states are not passive recipients of the Russian foreign policy. Rather, they see the existing regional order in their best interest too, and demonstrate sovereignty by maintaining the status quo. This is how other post-Soviet states in the wider Caspian become active participants of the existing regional order.

Implications for the EU

The existing regional order has many implications for the EU’s role in the region. Despite various working mechanisms with the region, the EU remains an outsider to the Caspian regional order. The regional order is partly reinforced by EU’s lack of regional ambitions in the Caspian. The EU and other external powers’ indecisiveness contributed to the strengthening of the existing regional order. The EU failure to defend allies such as Georgia against Russian aggression in 2008 is a demonstration of that. The lack of policy making towards the region renders the EU incapable to play the role of a reliable and relevant regional actor in the Caspian. The EU’s neighbourhood policy, for example, treats the wider Caspian as its borderlines and engages with the region to primarily secure its eastern borders. Beyond this, the EU has not been interested in expanding into the region, and establishing a meaningful and long-term security presence. If the EU and other external powers wish to change the existing regional order, they need to go beyond treating the region as their border zones, offer a strategic choice, and ensure the security of its allies in the region. Unless this happens, Russia will remain the only strategic choice for most states in the wider Caspian region.